Creating mock objects for data repositories is a common requirement in web application development. In this article, I will show you how to use GoMock to automatically generate mocks for your interfaces and use them inside unit tests.

When you have a service that depends on a repository to fetch some data, this repository will most likely be connected to a database. A typical sequence of events could look like this:

But of course you want to write unit tests for Service A. The easiest solution would be to also rely on the database in your unit test, but this has multiple disadvantages (among them: the database needs to be consistent at all times for running the tests; the tests would be much slower; failing tests due to database problems would point in the wrong direction).

Mocking frameworks solve this problem by providing “fake” objects we can use instead of the original repositories. They do not connect to a database, but instead return hardcoded objects (in the simplest case).

We will walk through this mocking process with a concrete example. Assume we want our Go application to track appointments (custom structs which have let’s say a start date, a first name and a last name; but we do not care about their specifics here). The appointments should be persisted to a relational database, and we use a repository to access this database.

Furthermore, there is an AppointmentService which performs business logic based on appointment objects. It uses the AppointmentRepository to fetch and persist the appointments.

Summed up, we aim to create the following classes: 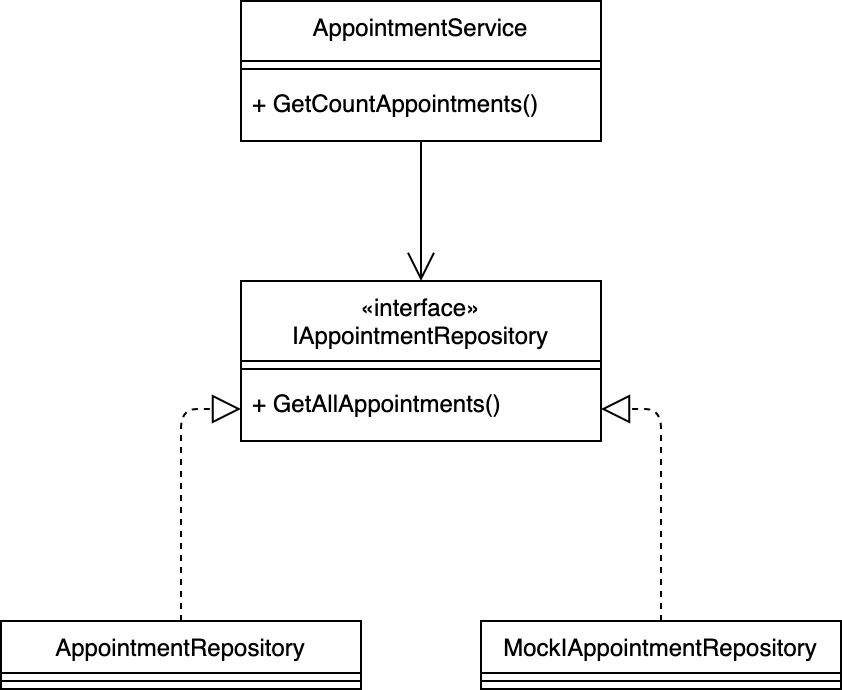 To get started, open a terminal, change the working directory to your project root and enter

This should install GoMock to your $GOPATH (make sure it is also in your path to make the downloaded mockgen file executable).

Depending on your $GOPATH, you will get a similar output:

Next, we create the mock object by running the following command:

Using the generated mock in a unit test

We are now ready to use the generated mock object inside a unit test. Create a file named AppointmentService_test.go with the following content:

The unit test creates a mock object (mockAppointmentRepo) and specifies what it should return when the GetAllAppointments() method is invoked (in this case, it will return two hardcoded appointment instances).

Then the mock object is passed to the appointment service and the GetCountAppointments() method of the service is invoked. Internally, this uses the IAppointmentRepository and just returns the total count of appointments received from the repository.

You can now run the generated test using go test – it should pass since the expected element count (two) is correct: